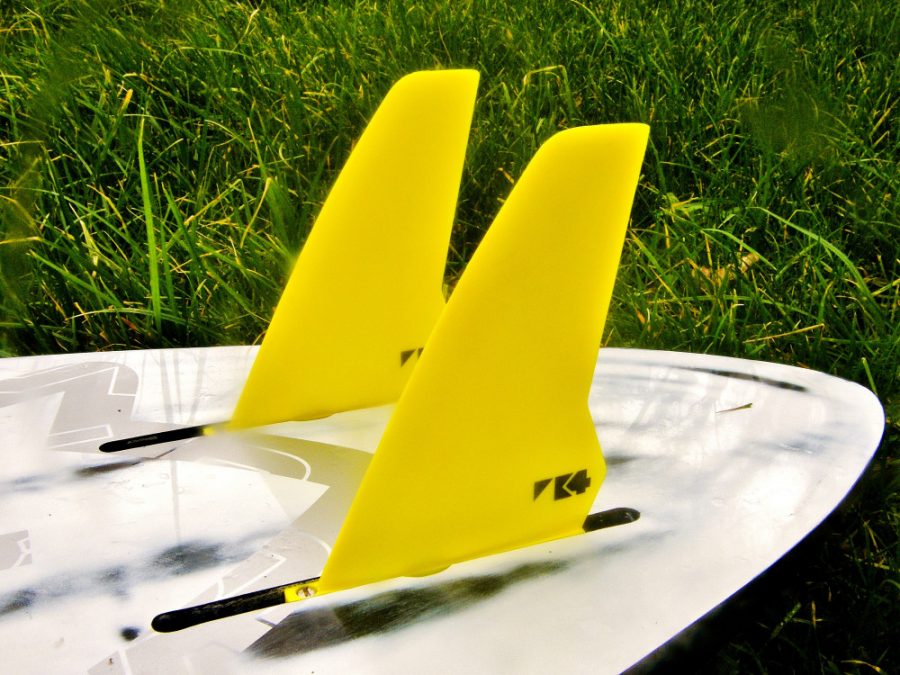 in Fins
by Steve Thorp

One of the newest lines of fin from K4 are the Rockets. Looking like the sleek and svelte wings you’d find on an American muscle car these babies are ready to blast you to the moon. With the brand’s distinct banana yellow colourway, agreeable price point and durability, what’s not to like?

Over to Tez Plavenieks who put the 16.5cm Rockets to good use during the last good blow he enjoyed on the south coast.

Having used a variety of K4s in the past I was keen to get my paws on Mr Thorps latest wave weapons. The Rockets are very distinct looking beasts and will add that much needed bling to anyone’s set up.

Rigid, with a tiny amount of tip flex, I partnered these babies up with my mid-sized wave board and a 4.9m. Keen to test these in real world wave conditions (read chop city) I launched into rippy swell and an onshore wind.

Having played about with positioning I found the Rockets worked best (for kit and conditions on the day) when set just a little behind centre. When my home turf is onshore there’s usually a decent amount of current running and getting off the shingle quick smart is a good idea.

As soon as I sheeted in it was toe hard down and I zipped upwind at a decent rate of knots. There wasn’t any side slip and quick as a flash I was beyond the flotsam and ready to gybe. Arcing into a full power corner the Rockets held their grip and powered me out of the turn red lining once again once the rig rotated.

It soon became apparent why these had been christened Rockets. Fast, efficient and drivey pretty much sums up their straight line performance. I could’ve actually gotten away with a smaller sail, such is the efficiency of these skegs.

Although real waves were lacking there were plenty of ramps for flinging yourself in all directions. With the speed and efficiency delivered it was easy to boost to the sky and rotate.

Anyone who knows will tell you I love turbo loops and the K4 Rockets massively help unstick tails and achieve the desired G Force needed.

The session in question was a choppy affair and kit was prone to bounce out. The Rockets, although blisteringly fast, kept my stick in touch with the water and firmly planted. As already mentioned, I could have rigged a sail size smaller, but even with the upper echelons of control being reached I never felt over finned.

Every now and again a steeper bit of chop would wall up and it was possible to crank a quick turn. These were by no means waves of Cornish standards but it did give an idea of how loose the fins were. For skegs so upright they were surprisingly turny and I now can’t wait to get them stuck in to some better surf.

Super efficient and fast fins, the K4 Fins Rockets will get you up to warp speed in no time at all. Great for south coast jump fests and although there weren’t any waves of consequence in sight I’m confident they’d perform great.

With a fantastic price point, distinct looks and compatibility across a wide range and size of wave boards, what’s not to like?

Hold in the turns