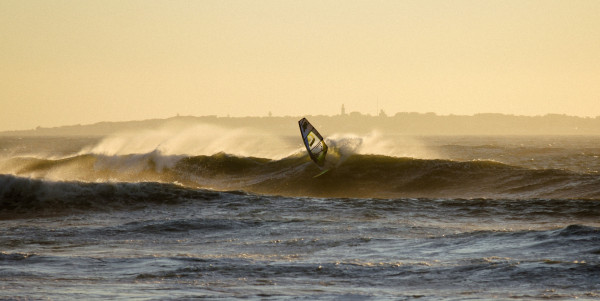 in Fins, How to, Windsurf
by Steve Thorp

Asymmetric fins and toe in aren’t the be all and end all of wavesailing -for most people it’s not that important. We do 3 ranges of symmetrical front fins and only one range of asymmetrical which reflects this.

I still think it’s interesting to see how much ‘toe in’ boards have, and for those who want optimum performance I believe it’s a very important consideration. All of our team riders use the asymmetric Ezzy fins and not because we force them -they can use whatever they like best but choose the Ezzy’s. It’s also a major headache for us and the last thing we want as an injection moulding company as we rely on moulding large quantities of the same thing to be profitable (So having 3 different heads, in 3 angles and 6 sizes giving 54 separate mouldings is frankly a bad idea all round).

We do it because we believe it gives the best performance, and still no one else is prepared to do this (Witchcraft being the exception and the first to introduce asymmetric fins for their own boards).

So today I’ve measured a few more up to date boards. It’s good to see that the Starboard has a healthy amount of toe as their original quad had zero and there was some denial that this had anything to do with its weird behaviour in the bottom turn (It’s far more noticeable on a board with relatively big front fins which theirs had. Relatively small fronts can disguise the problems). Simmer continue to be bang on with theirs, and if you’re making yourself a board I would follow their lead.

What’s not so good is that I’ve felt the need to lie somewhat on my measurements again to save some blushes. I can’t stress strongly enough how important it is to not rely on these figures but to actually measure your own board yourself.

So if you want to know your box alignment, get your ruler out, measure to within a mm is near enough, and then use our calculator..

Your Tri fronts should have around 3º per side for the Ezzy asymmetric to work best (so if your box measurement is 1º choose the 2º Ezzy), and your quad fronts 2.5º (as there is a need to line up more with the rears, unless the rears also have toe). Symmetric fronts are best at around 1-1.5º.

Apologies for this list being far from complete, but here’s the boards I’ve managed to get my hands on..