in Fins, Rider how to, video, Windsurf
by Steve Thorp 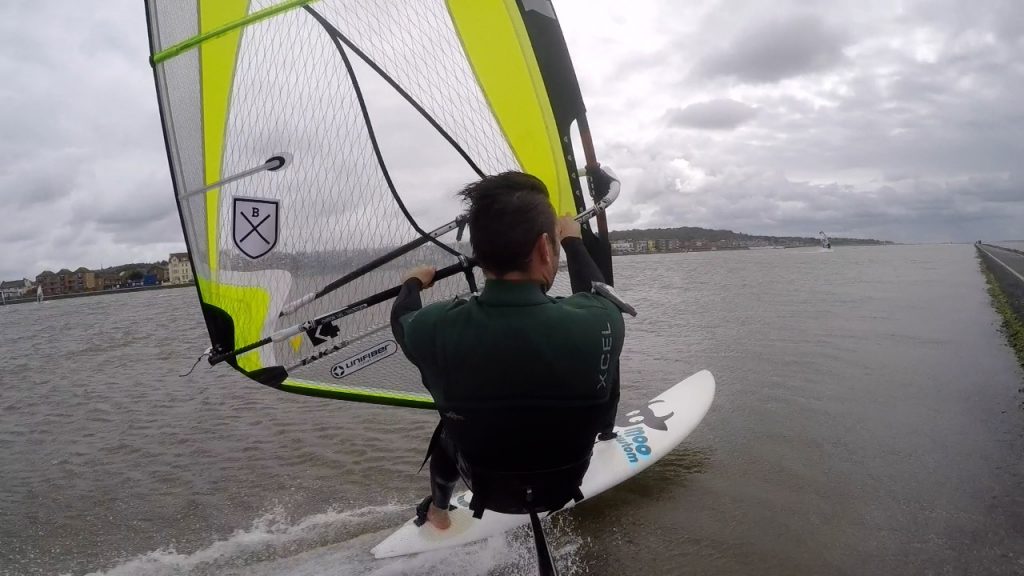 We’ve been asking ourselves for a while, what are the real differences between quad, thruster, twin and single fin set ups on our wave-boards? Is there really much difference in speed? upwind? early planing? carves?
And this whole toe in business, is it going to slow me down? speed me up? turn me tighter?

Well, we thought some speed testing was long overdue and would be pretty interesting..

There are no better places to test equipment than West Kirby. A massive flat stretch of open sand (at low tide) allowing very constant and stable wind, an infinity pool’esque set up giving mirror flat water and a carpark ten feet from the waters edge mean it’s dreamy for testing. It’s also good for 50 Knot runs on the right day (I posted what was at the time the worlds fastest 2 second peak here with 50.4 knots five years ago).

An old shot of a windy Kirby day: 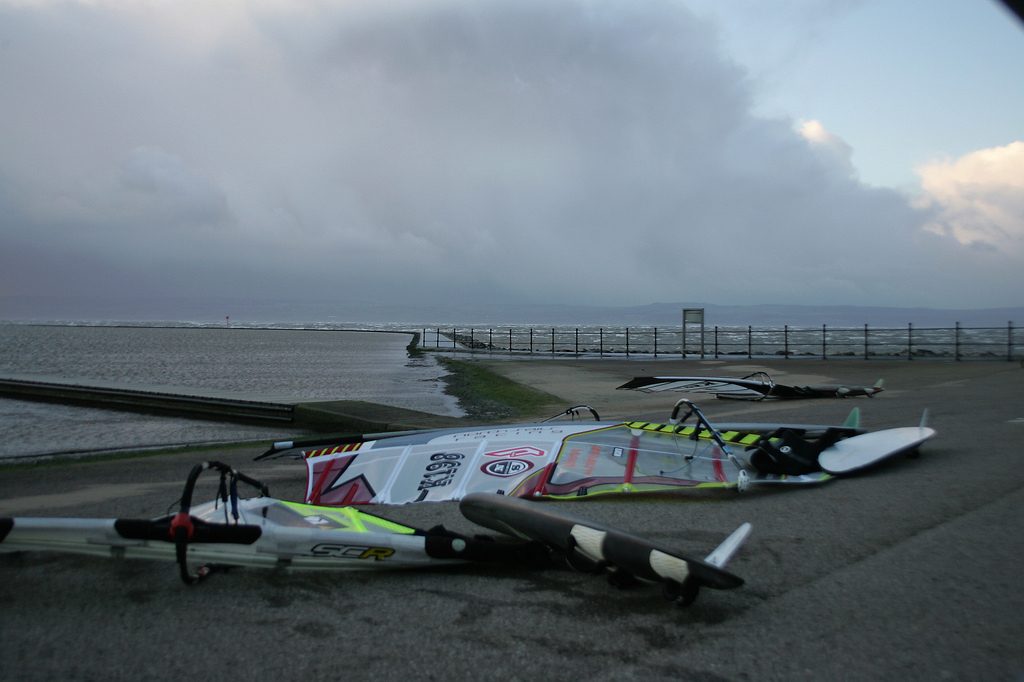 How did I test?

I’ve a super light, low rockered, pointy tailed, 5 boxed custom wave board by Moo custom which is perfect for the job. I bought with me a selection of 18cm rear fins (including 2 from other brands), 17 Leons in two stiffnesses, 16cm twins, 14cm quad rears and a selection of front fins with various ‘toes’ and ‘cants’. 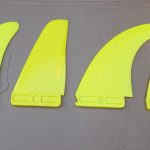 Some of the rears 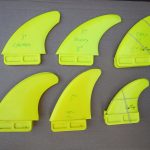 Some of the fronts 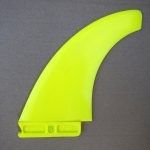 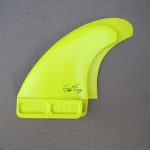 I did 3 or 4 runs with each set up, and 19 set ups in total. Starting in the top corner and pointing as high as possible to hug the wall, I’d then sling shot into the curve to achieve the best top speed, gybe at the same buoy, then head back upwind to the start before a quick tack and repeating.
I realise there is a major flaw with this testing and that is that the wind may change between different set ups. A better way is to sail ‘man on man’ on identical kit which is how we tested our free ride fins, but this was too difficult to organise and unrealistic to achieve for so many wave fins.

Results were obtained using the Hero 5 (which as well as filming also has a built in gps which can then be used to show speed, G-Force and track info gauges on the resulting video) and two GT31’s (very accurate gps devices). The results were then analysed using ‘GPS results’ which gives 2 second peaks, 10 second times, 100/250/500m times and 250/500m Alphas (@). The @250 and @500 results are interesting as this tells you how quickly you managed to get back level with your starting point and includes the gybe (you’re full speed at the start and finish).

How did it go?

It wasn’t quite as windy as I’d hoped. I used a 4.7 Ezzy Taka3 with which I was pretty powered up, more so than you would want to be for wave sailing, but still a long way off what I would consider ‘fully lit’ for speed. The speedsailors were using 5.5-6.3 on 80’ish ltr boards with the best achieving just shy of a 40knot peak. I believe the wind was actually pretty even throughout the 2 hrs, but I’d really like to repeat the test to be sure of the results. Unfortunately the local weather station at Hilbre Island no longer records the wind info.

This is perhaps the least exciting 5 minute video ever, but I wanted to document the runs. There’s one run shown from each set up. A few are missing because of the lens clearing issue (which I’m finding really difficult with the flat port Hero5 -yes I’ve tried everything!) and unfortunately the camera miss aligned a little after the Dog debacle
(https://www.youtube.com/watch?v=uXma46jpcCA ) if you haven’t seen it already!

At a glance this will tell most of the story:
(Click on image for full size)

I must admit it has surprised me how similar the speeds are. Whilst testing I didn’t know what speeds I was achieving and if the runs ‘felt good’ (ie. powered up and ‘clean’) then I moved onto the next set up. With the brand ‘X’ fin I definitely felt it hadn’t had a fair run and didn’t want it to seem as though I was deliberately disadvantaging another brand, so I waited until I was sure the wind was gusting before I made the final run and ‘banged’ the corner (and went 3mph quicker). The same wasn’t true of the quad set ups, it felt windy at the time and the runs felt good…   I went quite a bit slower with the Ezzy quad set up. Had the wind dropped? maybe. Did I feel more powered up due to extra drag from the 4 fins? possibly. (I wrote the note on the results table after seeing the gps speeds but in hindsight it didn’t feel less windy). Need to repeat this to confirm.

When you look at how similar all the other set ups were on top speed it makes me feel that fin drag is actually a small part of the overall drag and it doesn’t make much difference how many fins are in. Dropping the fronts from an 18/12 for example and sailing with just the rear made next to no difference to top speed, in fact a little slower if anything (and remember I’m pretty powered up and sailing off the wind – not feeling under finned in any way..).

The Ezzy 2 quad set up was the slowest of all by some margin. This might be down to the difference in angle and close proximity of the ‘straight’ rears. This is why we use 3º for thruster front asymmetric fins but only 2º for quad -you can feel the disparity when sailing, the board feels like it doesn’t track the same line on each fin. This is largely down to the rears not having toe, as a surfboard would.
Before you write off the Ezzy front quad fins though, note that they resulted in the most confident gybes, highest g-force (I doubt the reading is reliable from the end of the pole!) and best @250 time (back to start point with gybe).

For the thruster set-ups it really didn’t seem to affect top speed greatly wether you had toe, cant, stiff or bendy fins.

Note that the ‘winner’ of this test with a speed of 33knots was the twin 16s set up (our new Scorcher -stiff thin with swept and flexy tip). Always been a twin fan!

The other thing that surprised me was just how well, and with equally tight radius all of the set ups gybed. It seems that for a certain speed you end up gybing with a certain radius regardless of fin set up. For sure the single fins felt a lot less secure and you had to be lighter footed, but if you put the board on rail it described the same arc. I think here the differences are more apparent if you turn off the back foot and at the lower speeds you’d be travelling during a wave ride.

The Brand ‘Y’ fin was interesting as this is generally regarded as one of the best wave fins you can get your hands on, and often applauded for it’s top speed. It actually turned out to be pretty awful for runs at Kirby, feeling like it was going to let go at any moment and never going that quick. I think what wave sailors really mean when they say a fin is ‘fast’ is that it feels fast because it’s lively and accelerates quickly when pushed against.
There’s often a misconception that bendy fins are slow, when in fact the reverse is true. In our ‘man on man’ Free ride testing with 3 different versions of the same fin (same mould, 3 materials), the bendiest would always have the best top speed. But again the stiffer fins felt better upwind and more slippery/lively, so those would be the favourites in anything other than a drag race off the wind.

The winners were surely the stiffer single fins in this department (especially the more upright ZBD and Leon). The other set ups all seemed pretty close behind and I could tell my angle upwind from gybing at the same point and noting the highest landmark I could head towards. The 1º symmetric front 12s did suffer from a lack of tracking which seemed to disappear when replaced with 1º 10s or 3º asymmetric Ezzy, presumably as the 18 rear becomes more dominant (an effect I notice a lot).
The quad set ups seemed to stonk upwind when fully powered but struggled to point and get going (unstick) at the start of each run in the lighter wind in the carpark corner.

There are certain things I like from a wave fin and none of them have really been tested here;
To be able to chuck the board straight onto the rail into the bottom turn as it feels good. To drive through the turn but still be able to adjust my line, especially pulling the board around tighter to get a more complete turn and get vertical (or past vertical). If I arrive at the lip with too much power in the sail I’d rather the fins twisted to dump some drive rather than feel like my legs are going to cave in against an immoveable force or the fins let go if I try to make the turn. I want them to keep gripping if I come right round on a cut back, only letting go if I deliberately ‘blow’ the fins out the water.

These are the reasons for Flex, toe and asymmetry. They probably won’t make you faster, or slower, but it will enable you to surf the wave the way you want to with the confidence to push the board as hard as you can. Feel on the wave is the most important part for me and the different fin set ups do make a huge difference.

I’m hoping to get more testing at West Kirby in the near future with windier conditions and perhaps a square course to give more rounded/applicable results.